Per-Second Billing for EC2 Instances has begun. This is good news for AWS users who want to execute multiple jobs simultaneously. EC2 was hourly-pricing before that. Please imagine the following two cases:

Under the hourly-blling, Case (2) costs five times compared with Case (1). Now the cost is same in these cases. Per-second billing is also applied to AWS Batch. In this article, a number of CFD (Computational Fluid Dynamics) jobs are executed with AWS Batch. The procedure below is based on the hands-on in JAWS-UG HPC. A usage fee for the jobs is also estimated at the end of this article.

Acknowledgement: Thank for porcaro33, the creator of the original hands-on, to allowing to publish this article

The same network architecture as the one used in the original hands-on is employed. By following the procedure below to build the environment with CloudFormation, an EC2 instance maned "Ubuntu Bastion" is launched. Files to be used are pre-loaded to the instance. You only have to edit some files and build Docker Container. By executing the pre-loaded Python script, jobs are submitted to AWS Batch and executed Auto-Scaled EC2 instances.

OpenFOAM is introduced as the software to perform CFD. pitzDaily, one of OpenFOAM tutorials, is calculated 720 times while varying boundary condition of incoming flow. Velocity components for x, y and z directions are varied within a defined range. Following figures show examples of the calculation results visualized with paraFoam. 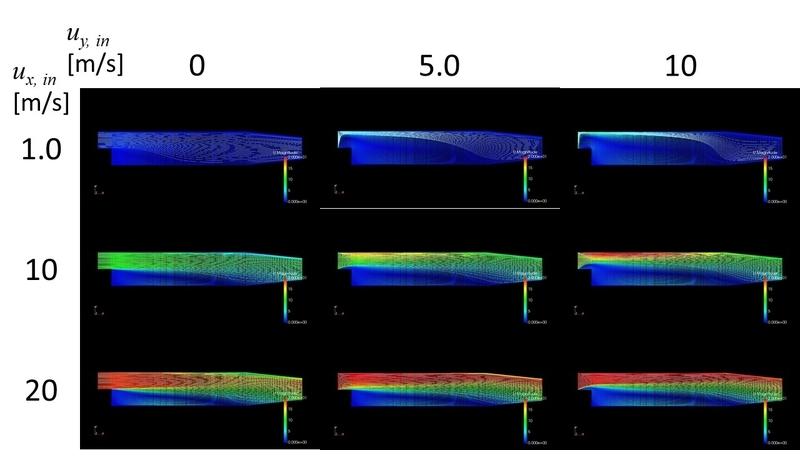 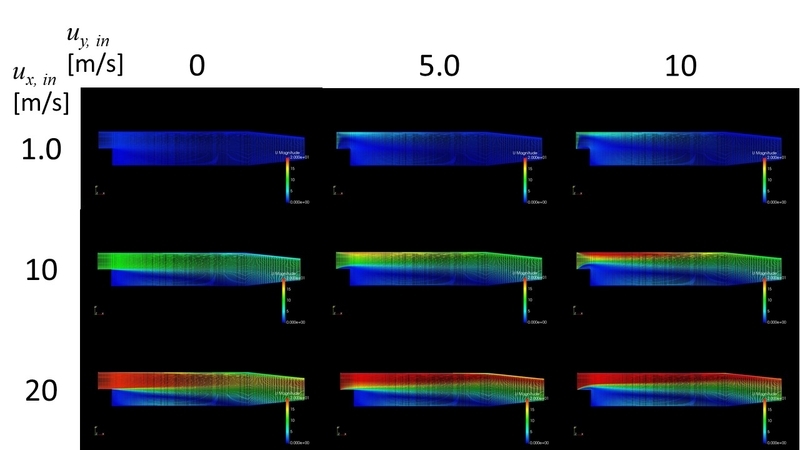 Only the contor for the velocity magnitude is shown. 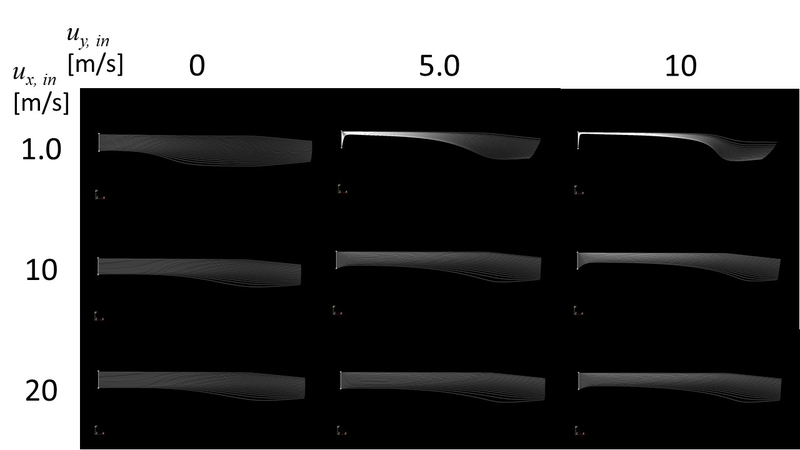 Only the white line for StreamTracer is shown.

Login to AWS management console, and choose "US West(Oregon)" region. Click "EC2" to careate a key pair for SSH connection. 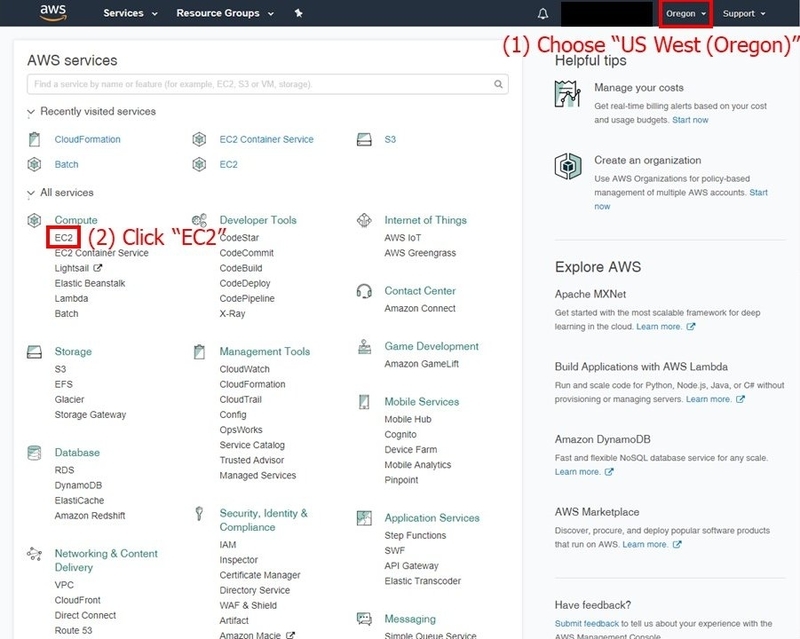 Click "Key Pairs" and "Create Key Pair", input a name of the key pair to create, and click "Create". Save the secret key file (.pem) from the download window. Take care not to lose or leak the key. 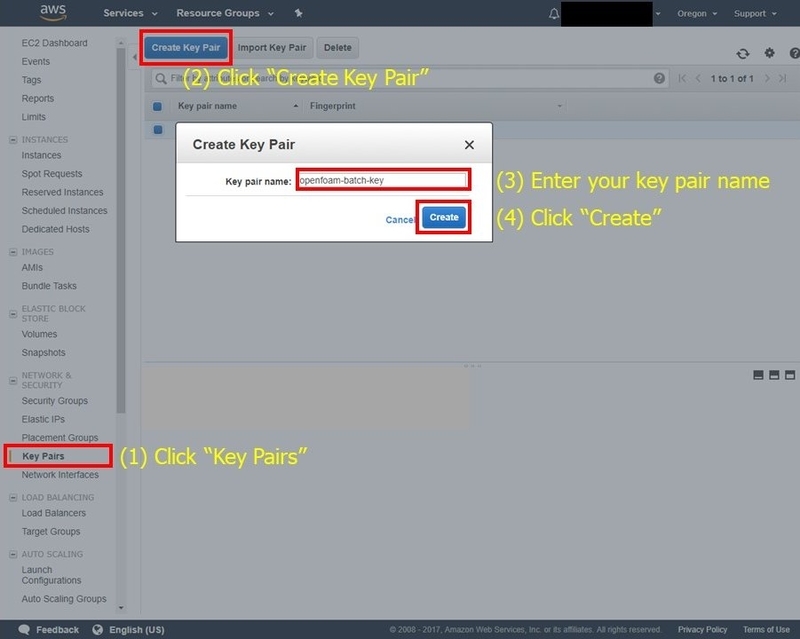 Go to the home of the management console, and click "CloudFormation" to create the environment. If this is your first time to use CloudFormation, the following page will appear. Then choose "Create New Stack". 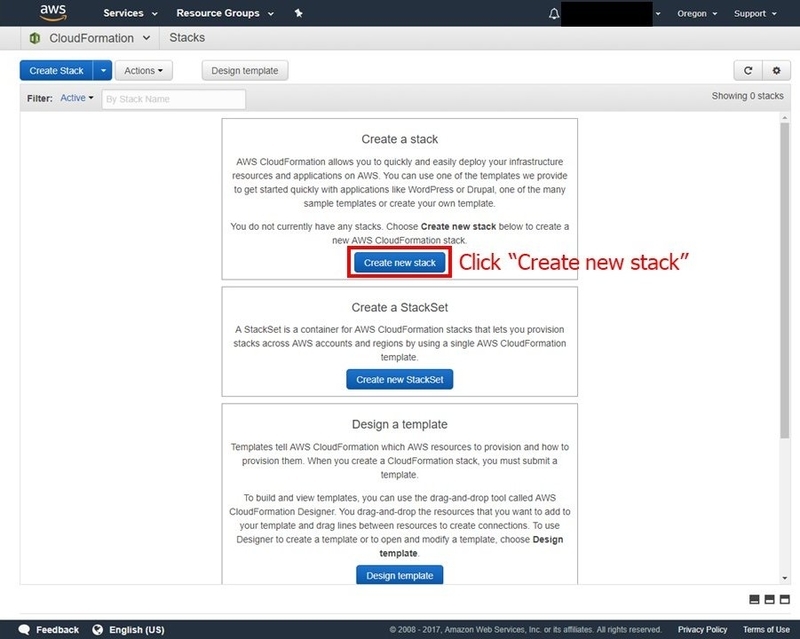 Press "Choose File", and choose the CloudFormation template file you downloaded. After that click "Next". 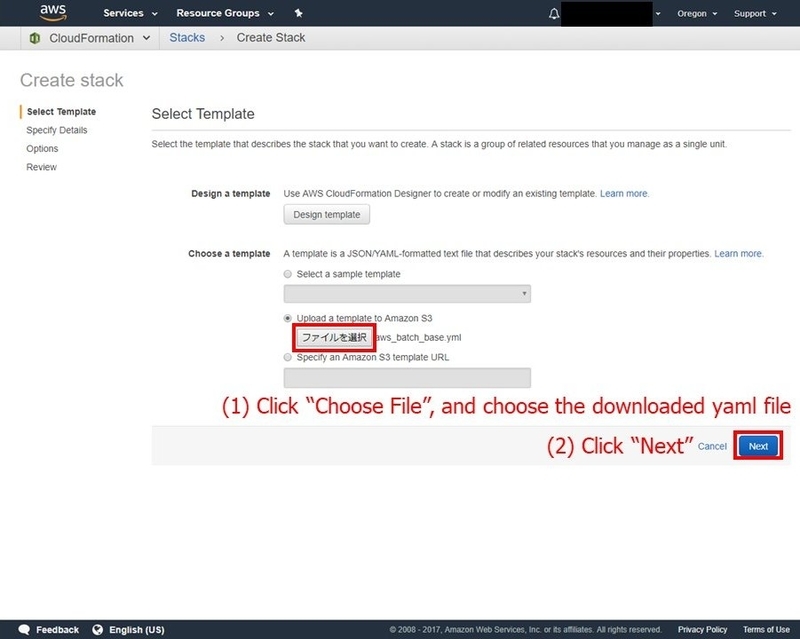 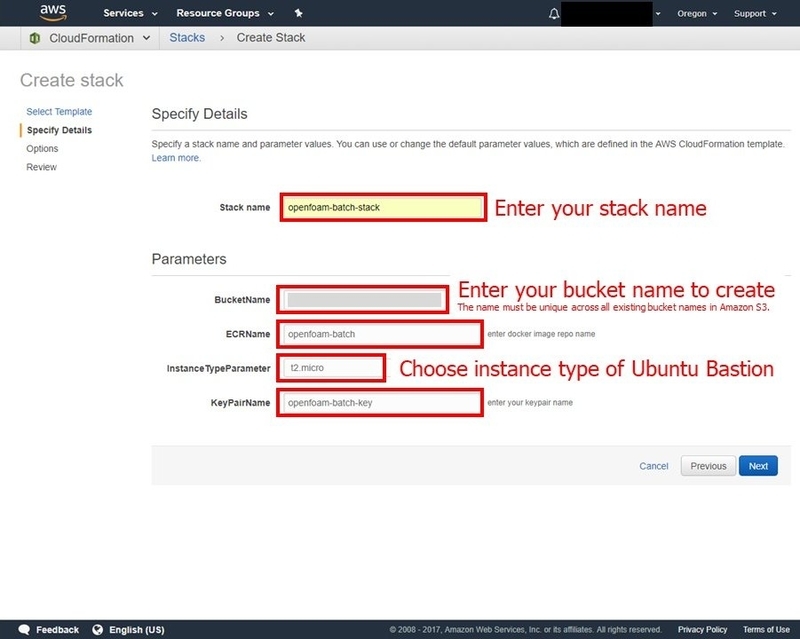 Scroll to the bottom of the page, check the box, and click "Create". 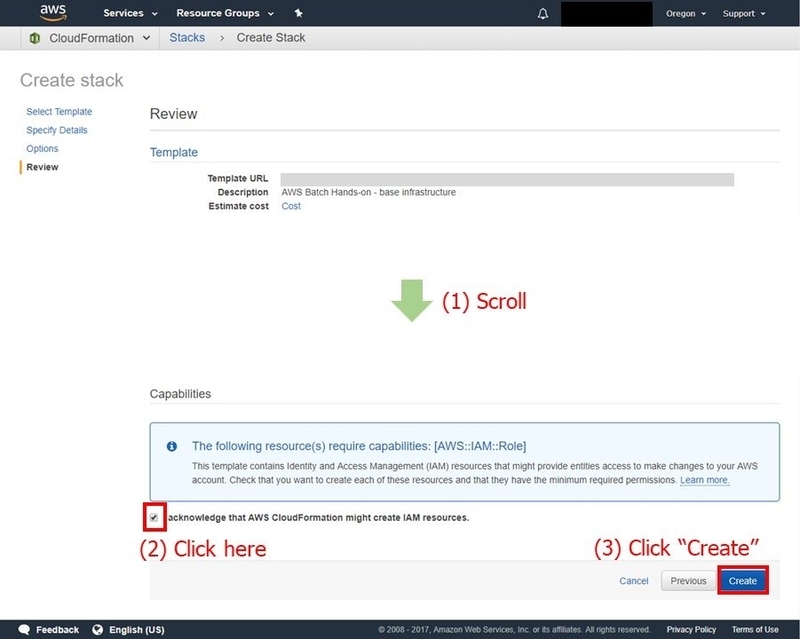 Now CloudFormation start creating the environment automatically. Ubuntu Bastion will be launched, and this repository on GitHub will be cloned. Wait until the status of the stack turns to CREATE_COMPLETE on the management console. 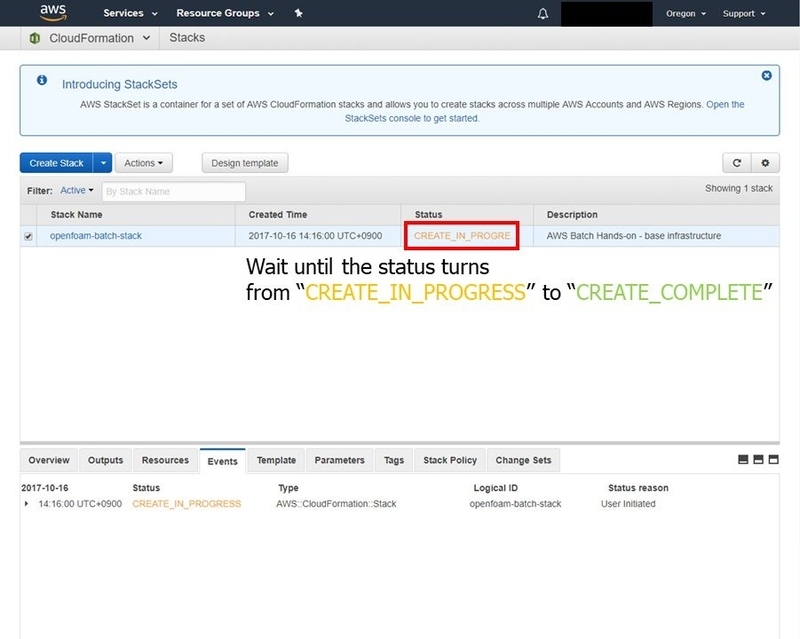 Connect to Ubuntu Bastion with SSH. Target IP address is shown in Outputs tab of CloudFormation. 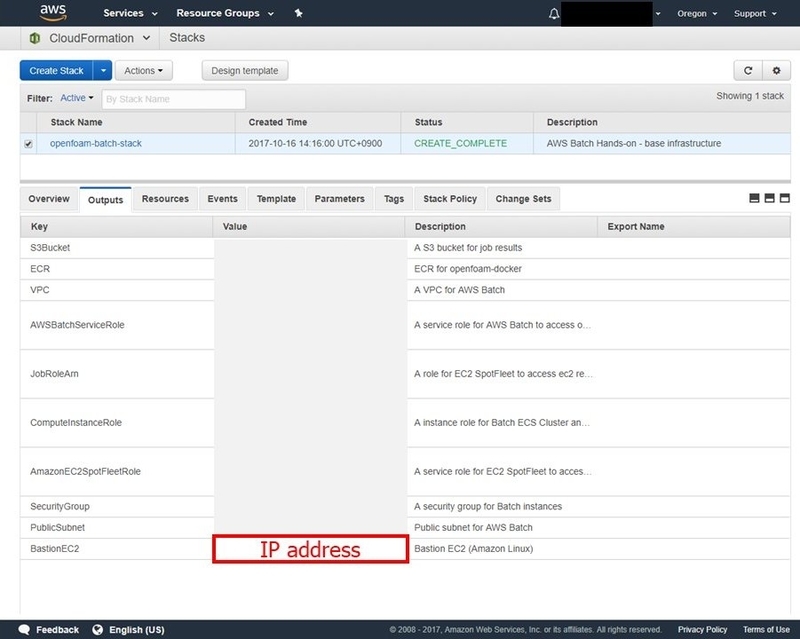 Confirm files are cloned from GitHub.

Let's save the container on ECR. First, get the login command with the following command.

A long login command will be returned, then add sudo at the top and execute the command. "Login Succeeded" is returned if successfully logged in.
Add a tag to the container, and push to ECR.

You do not have to edit job_queue.json.
Create Job Definition, Compute Environment, and Job Queue with the following three AWS CLI commands, respectively.

At the end, execute the script "submit_batch.py". Comments like "Submitted JOB_00001 as ..." will be returned.

On the dashboard of AWS Batch, transition of the job state can be seen.

On the list of the EC2 instances, you can confirm the instances are terminated after all jobs are finished. 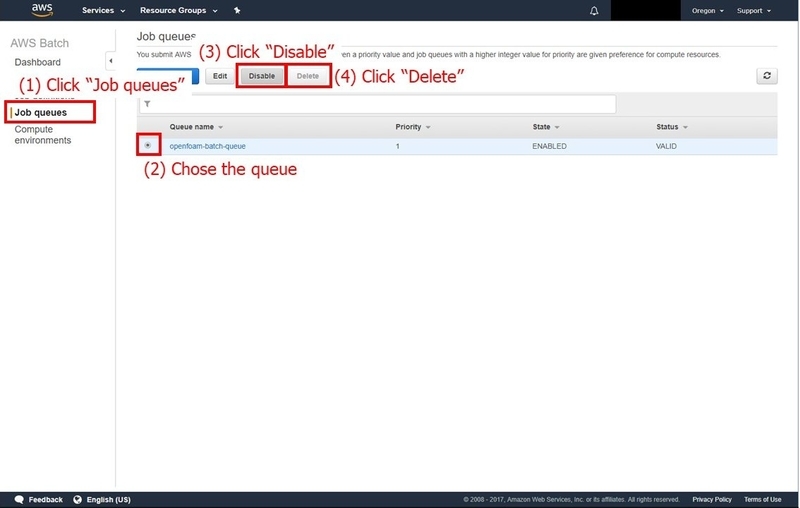 Next, disable and delete the Compute Environment. 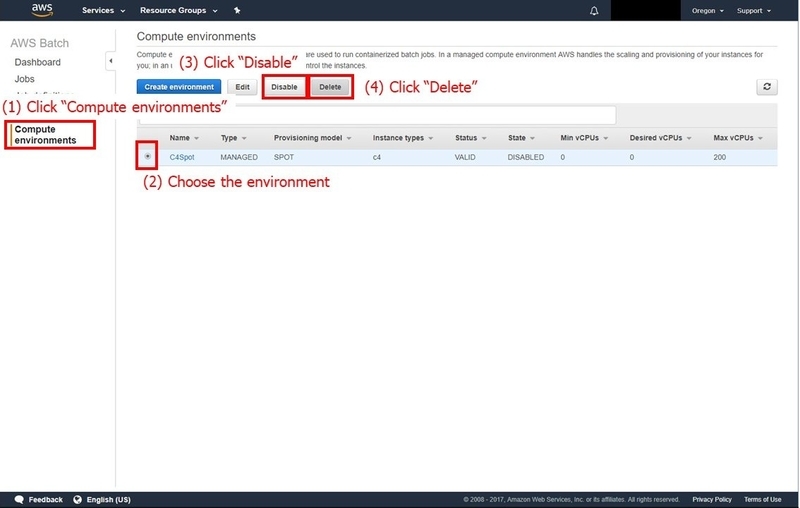 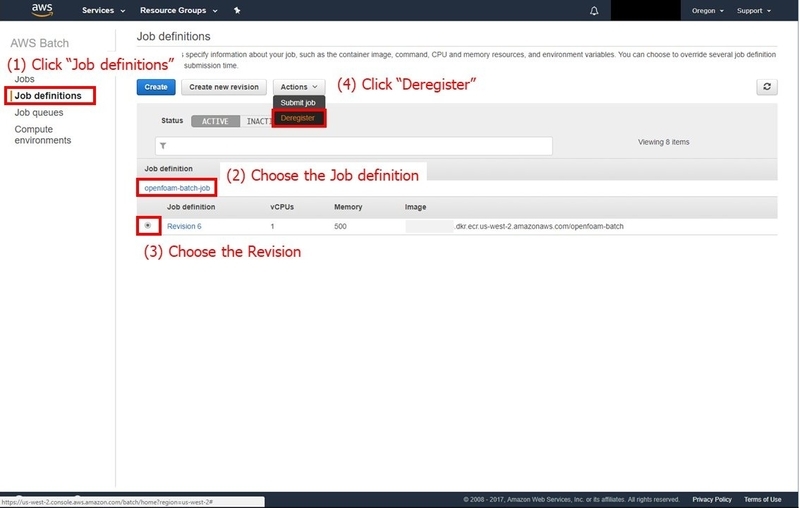 Delete all of the files in the S3 bucket. Otherwise, the stack deletion, at the end of this procedure, will be failed. 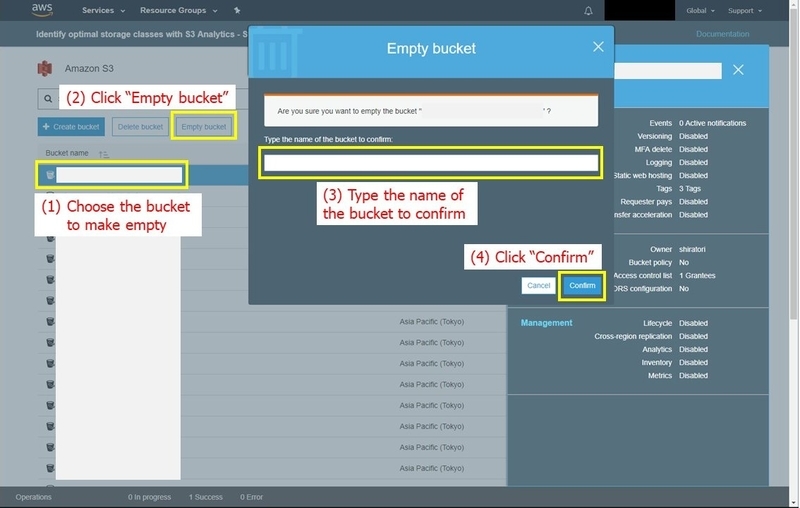 Finally, delete the stack of CloudFormation. By doing this, Ubuntu Bastion and the S3 bucket is deleted.

Let's estimate the cost for the procedure above. As a result, it costs about 1 USD.

In this procedure, the Compute Environment is configured to scale out up to 200 vCPUs (described in computing_env.json). When I tried, EC2 instances are launched as the following table shows.

The cost for the instances is calculated as follows if they were on-demand instances.

In this article, batch jobs of OpenFOAM are executed with AWS Batch while sweeping the boundary condition. The cost for the batch is also estimated. Per-second billing for EC2 is beneficial in cases computing time is less than one hour. Make your batch job cost-effective by combining per-second billing and spot instance.