In this article, I'll construct a system with AWS Lambda to enable parallel image processing. The processing algorithm is based on Particle image velocimetry (PIV) which is one of the measurement technique utilized in the field of fluid mechanics.

Before I started my job in Serverworks, I was a researcher in the field of fluid mechanics . In fluid mechanics, main target of study is flow of liquids, gases and collectively called fluids. Particle image velocimetry (PIV) is one of the measurement method which is utilized in this research field. High speed video cameras are used to record flows, and the flow is quantitatively measured by processing the recorded images. PIV is widely known in the field of fluid mechanics because of its advantage that can measure flow distribution in a wide space. One of the disadvantage of PIV is to require a long time to process images. This disadvantage is serious problem for researcher in case many images have to be processed. In this article, I'll try to process images in parallel to shorten the time required to the processing.

PIV is a technology to measure fluid flows quantitatively by image processing. There are various methods of PIV with different image processing algorithms. In this article, I'll introduce Direct Cross-Correlation Method (DCCM), which is the most basic method in PIV. Image processing algorithms have to determine from where to where the fluid flows. In DCCM, cross correlation between parts of images is referred for the determination. To learn the detail of DCCM algorithm, please read technical books like this (in Japanese). Here, I'll summarize inputs and outputs of DCCM.

What is AWS Lambda?

AWS Lambda is a fully-managed service to run codes. The code is saved as a Lambda function, and trigger conditions can be set for it. The function is invoked when the trigger condition is met. Lambda is usually used to link services on AWS (ex.1, ex.2) or link external APIs and services on AWS (ex.1, ex.2). In this case, I'll use Lambda for image processing, and let it do hard calculation.

Why should PIV and Lambda be combined?

Detail of the architecture

Before showing the architecture for parallel processing, I'll show you the single architecture which derive one flow velocity distribution from two images. 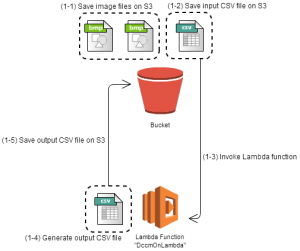 Figure 1 Architecture for single image processing A code of DCCM should be saved as a Lambda function "DccmOnLambda" in advance. An event source was set to invoke DccmOnLambda when a CSV file is saved on S3. By configuring like this, the image processing is executed as following:

This tutorial provides by AWS was helpful to construct this system. I recommend this to read.

How does it work?

I'll show you how the architecture works by processing actual images. I used PIV Standard Image, provided by Prof. Okamoto (Univ. Tokyo), as input images. I chose No. 01, 2D Wall shear flow/Reference, for the input of the test image processing. The four particle images are named from piv01_000001.bmp to piv01_000004.bmp. The particle images are shown in Figure 3 as GIF animation.

At first, the single image processing was invoked to show how the Lambda function "DccmOnLambda" works. An input condition for the test processing is summarized below.

The input parameters are written on the CSV file as Figure 4 shows. Interrogation Area and Search Area are calculated as two times and plus one of the numbers on the CSV file because these should be odd numbers in DCCM.

Figure 6 Log of the Lambda function under single processing (calculation completed) By opening the output CSV file with GraphR, flow velocity distribution is displayed as vectors like Figure 7. It seems the vectors describe the particle motion in Figure 3 well. We can also see some vectors point wrong direction. These vectors are called error vectors, and it is difficult to prevent them completely. It is possible to obtain more dense vector distribution by shortening grid size in the input parameter. Since maximum time out of Lambda function is five minutes, We have to be careful not to exceed it when calculating dense vectors. 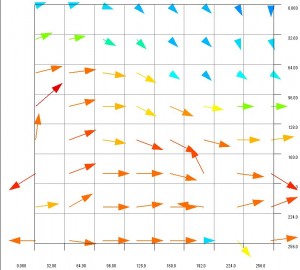 Now I'll try the parallel processing. A parent-CSV file like Figure 8 is saved on S3.

Figure 8 Format of parent-CSV By saving the file, the Lambda function "csvdivide" is invoked. It reads the parent-CSV, and generates child-CSV files. In this case, three processes run in parallel: as we have four image files, flows between first and second, second and third, third and fourth images are calculated in parallel. Thus "csvdivide" saves three child-CSV files on S3. Figure 9 shows the log of "csvdivide".

Figure 10 The log group which shows three image processes are running in parallel Logs of each image process are shown as Figure 11. 12 and 13.

I constructed the system to run image processes in parallel with AWS Lambda. The system is simple enough that I, experience AWS less than one year, can design and construct it. The upper limit of time out of Lambda function, five minutes, will be a bottleneck when velocity distributions with high resolution are required. This is also the case with processing large images.